We’re delighted to announce that our paper on the design of Enzian has been accepted (subject to final shepherding) to the 27th ACM Conference on Architectural Support for Programming Languages and Operating Systems (ASPLOS), to be held (hopefully) in Lausanne next month! 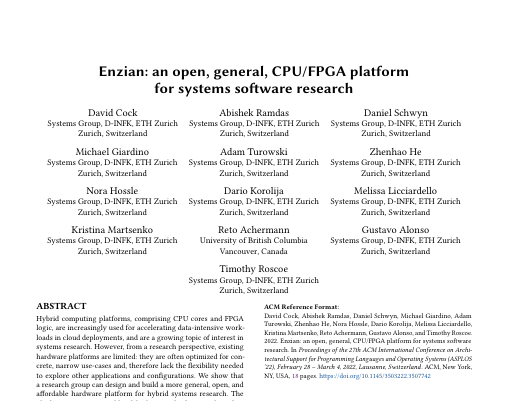 In the paper, we motivate the problem that Enzian is trying to address, as a computer built for research and therefore optimized for

We also talk about the design principles which have guided the project from the beginning:

The evaluation shows that, not only is Enzian fast (actually, rather better than we had hoped for!), it does indeed achieve coverage: we can support pretty much all the existing research use-cases of other platforms, with equivalent performance, on a single system.

We’re also going for all three of the artifact evaluation badges:

This is a bit of a challenge for a piece of hardware, but we’re fairly confident we can pull it off, given remote access to the operational Enzian machines by the Artifact Evaluation committee.

Together with getting the first 9 systems running, this a pretty big milestone for us, and we’re proud of the paper. We’ll post it as soon as we get approval from ASPLOS.